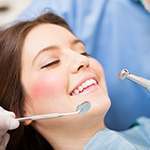 Attending a dentist appointment can be scary for some, mor Read now... 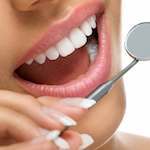 From childhood, we are taught that using a toothbrush twice Read now...

The Benefits of Oral Irrigation 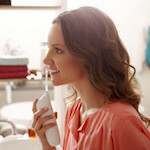 Oral irrigators, also known as dental water jets may sound scary but they are simply an efficient and effective alternative to flossing.

A small, handheld at-home device, oral irrigators use a stream of pressurised water or mouthwash to loosen and remove plaque, debris, bacteria and food particles from the small spaces around dental implants, under dental bridges, between teeth and around and below the gum line. Brushes reach less than 1mm below the gum line as compared to up to 7mm for oral irrigators so they are extremely effective at reaching even deep periodontal pockets. If left to build up this debris can lead to dental cavities, tooth decay, bad breath and gum disease so it’s important to build flossing or irrigation into your daily dental routine.

Oral irrigation is a far easier, more effective and quicker way of cleaning between your teeth than flossing as the water streams can reach far back into the mouth allowing you to access all areas of the mouth and it’s super quick;  taking just 60 seconds to clean all of your teeth!

By  performing oral irrigation into your daily oral routine as a precursor to brushing you are ensuring that your teeth are effectively reducing the toxicity and thickness of the plaque before you progress to brushing with fluoride toothpaste. Studies have shown that by using an irrigator along with your daily brushing twice a day, you can remove a staggering 99% more plaque and improve gum health by up to 93%, compared to brushing alone.

Oral irrigators come in various makes and models. The most common type for home use is a pulsed flow irrigator but there are also direct flow or steady stream irrigators.  Some models incorporate additional functionality such as air bubbles or magnetising strips so choose one to suit your budget and feature set. To use simply fill the water reservoir, direct the tip at a 90º angle to the long axis of the tooth at about 3 mm away from the gum line and release the jet. Follow the full length of the gum line stopping at each gap between teeth for approximately five seconds. Although the jets of water are powerful they are gentle and non-invasive so are totally pain free. As well as performing a cleaning action these pulsating streams of water actually massage the gums stimulating the gum tissue and boosting blood flow.

If you have good teeth and healthy gums, with no little gaps, and no bridges or implants an effective daily brushing and flossing routine is generally enough for most people to ensure good oral hygiene. However if you have some gaps between your teeth due to gum disease or tooth structure, or under bridges and around dental implants, then a oral irrigator would be an extremely beneficial addition to your current routine. Don’t forget an oral irrigator is not an alternative for a good electric toothbrush, it's an additional tool!